Everything started with an ‘urban safari’ in Spain, some years ago… The tour consisted in making us discover main masterpieces of the popular district of Lavapiés, in Madrid. Our guide explained the different styles from one artist to another, as well as the claiming messages behind each artwork, which facinated me the most. I found the whole thing very powerful: drawing on the walls, bringing art down to the street, knowing that it’s ephemeral and making it militant still. I realised that street art was strongly linked to the neighbourhood and inherent to the local life. 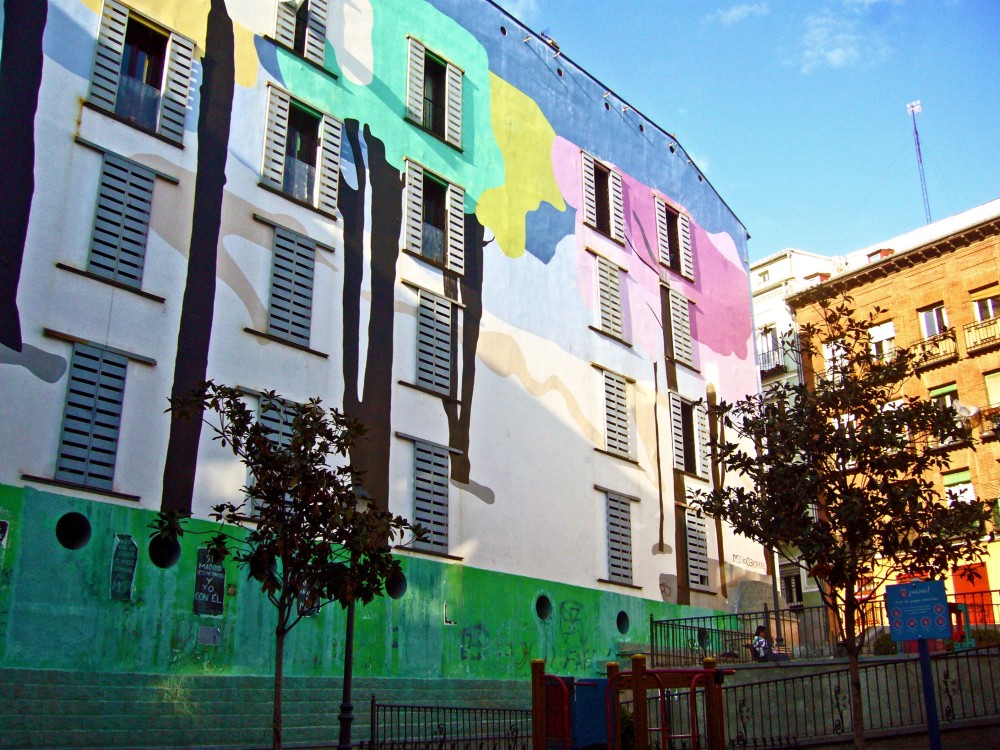 I went back to Lavapiés since, and my impression remained the same: a district full of colors and inspiration, located between the Reina Sofía Museum and the vintage Rastro market. If you plan to discover Madrid street art, pay attention to details (you can find artworks at the bottom of some walls). Try to catch the recognizable hearts from El Rey de la Ruina, which are everywhere and make the city vibrate. Don’t miss the Miguel Servet street as well as ‘Esta es una Plaza’, the coolest community garden where street art is definitely present inside and outside. Get on board! Watch this video where I present it: Marca Erasmus. 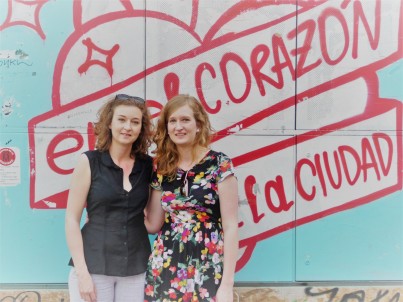 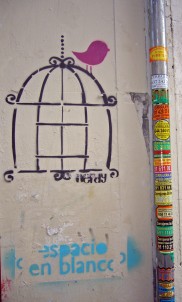 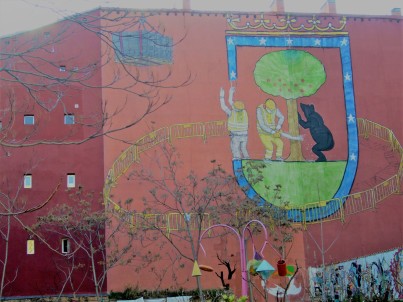 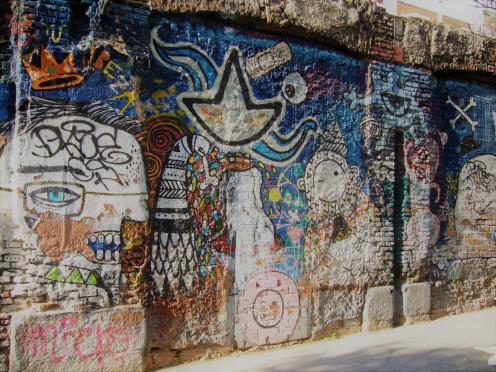 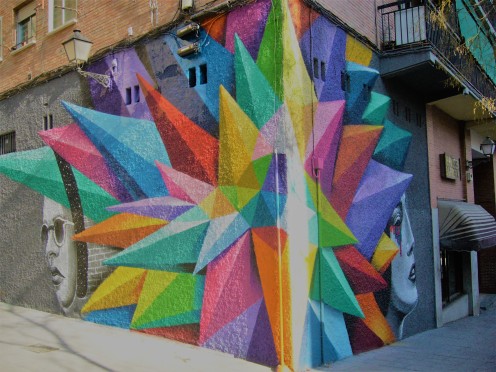 My discovery of street art went on in Montreal, together with my best travel buddy: my British Queen Nicole who I precisely met in Madrid! Montreal definitely reaches another level in this regard: the city is full of amazing murals and my favourite one is this Native American girl, which was the first thing I used to see, every time I arrived at the Montreal bus station. Not sure if the girl is still there but this incertitude is part of the beauty. How many times have I walked up and down the streets, wishing to get lost to appreciate the powerful art on the walls? How many times have I had to stop in front of a huge artwork because it was stunning? How many times, Montreal? Definitely a great city to travel to, if you are a fan. 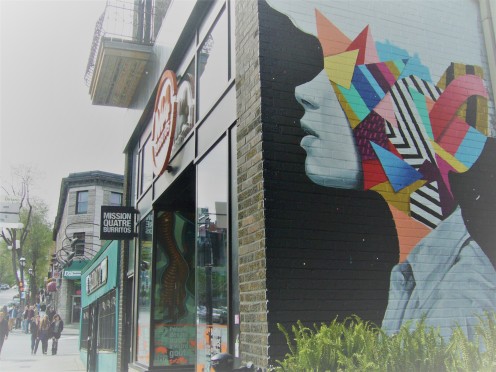 New York, Queen of the pop culture! Of course, I have to talk about Williamsburg, located in Brooklyn. Unknown before I setting foot there, not part of my itinerary but a very nice discovery. I remember walking between the colourful walls and stopping for Mexican tacos with my ex-roomies Camilo and Nicole. I found the whole area super hipster and full of cool rooftops where to have a drink or dance. So if I can advise you, don’t necessarily spend all your evenings at Manhattan and explore areas such as Williamsburg, where local life is going on in the city which never sleeps. 😉 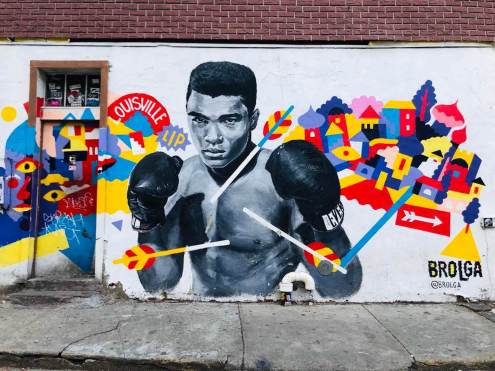 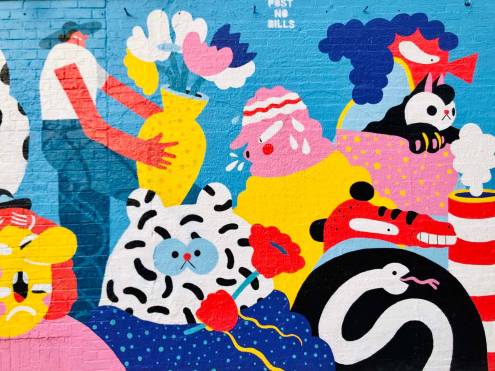 And then I moved to Paris, quite classic style in appearance. So, I started to dig out until I found the nugget district, next to where I lived: Paris 13ème, as French people would call it. After being attracted by the giant murals which you observe best from the skytrain line 6, I booked a guided tour once again to get some insights about the Parisian artists. The style was very different than in Montreal or Williamsburg, it sometimes looked more hand-made but with nice references to French artists such as the music band Louise Attaque or the humorist named Coluche. What is great with this district is that street art is something which the mayor valorises and encourages by financing artists to paint on the walls. Knowing that street art is originally linked to an illegal activity, I find it a big step! 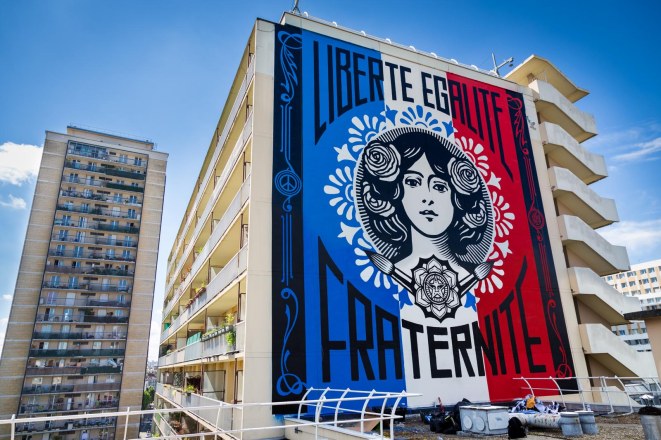 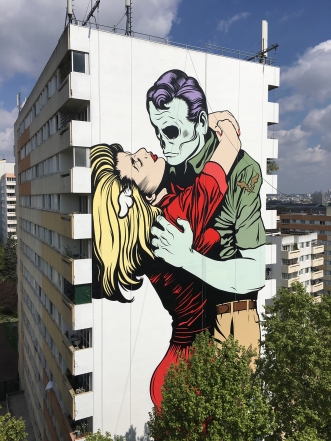 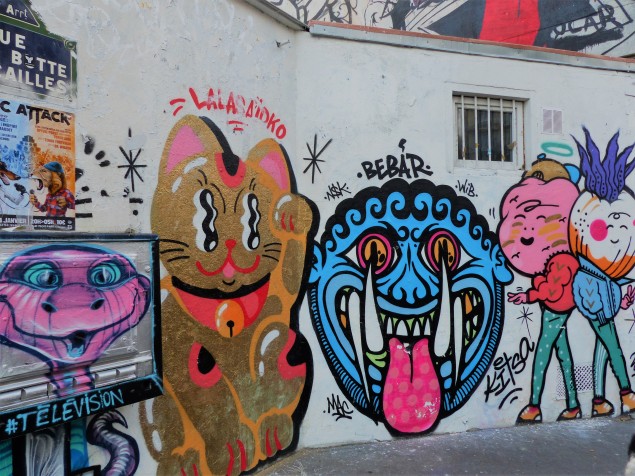 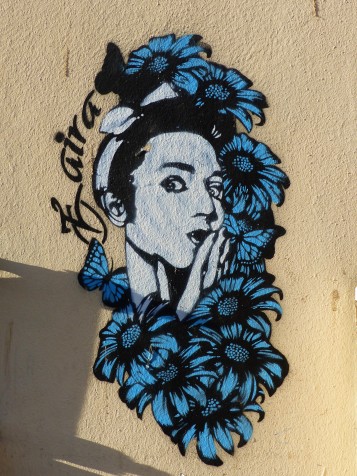 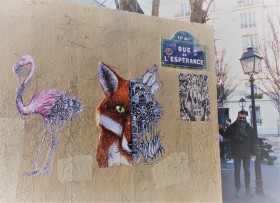 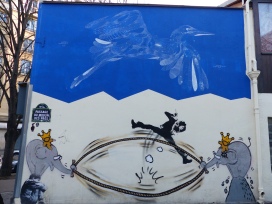 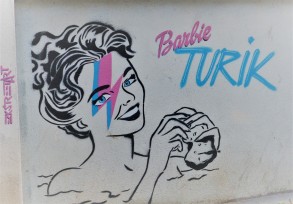 On the road again with Nicky… this time the destination was Brazil! What-A-Surprise, literally. I could never imagine such a street art jungle. A proper ‘urban safari’, yes. 😉 We just Googled it and headed straight to Vila Madalena, a district in São Paulo where we dropped our suitcase for a few days. The more you walk into Vila Madalena, the more graffiti pop up. At some point, every meter square is tagged and you feel like Alice in Wonderland going through a graphical world. Honestly, it was magical! The funny thing is that July in Brazil is winter, which means it’s already pitch black at 4pm. Prepared as we are, we ended up doing most of our visit by night and in some dark streets. We had to take pictures of the walls with the flash to make it appear on our camera screen and be able to see what was on the walls. What good memories! I can only recommend this place for a visit or a photo shooting. 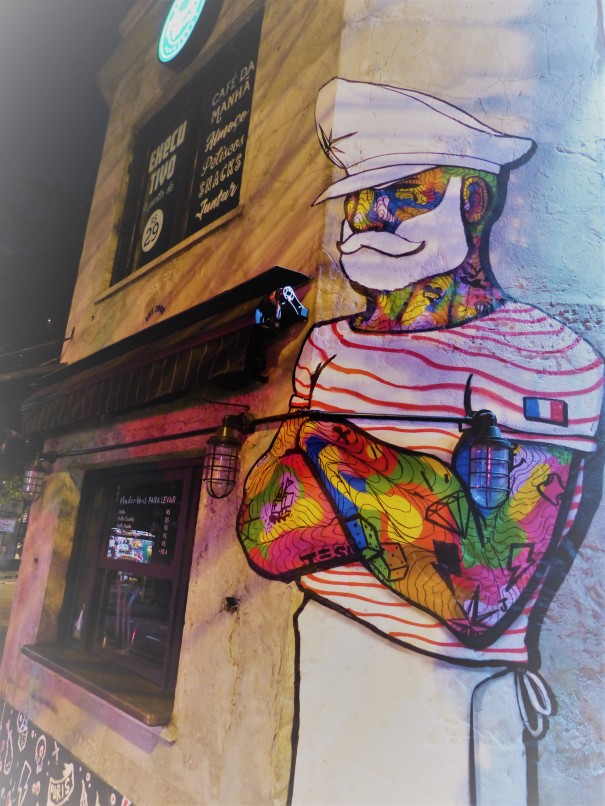 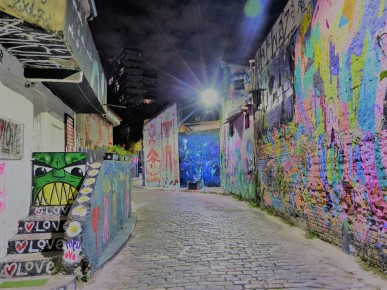 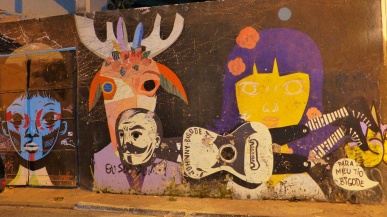 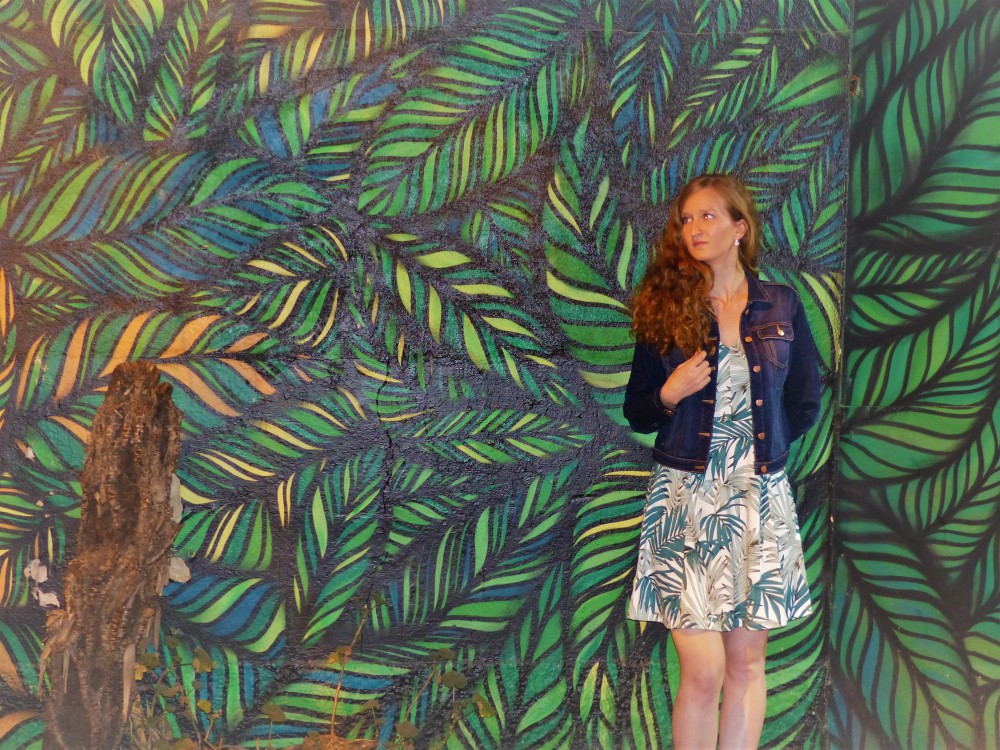 Even though I find articles affirming that Prague is an amazing city for street art lovers, I still have troubles to identify those spots (I might be wrong). But if there is ONE cool place we have in Prague, it’s the Lennon wall in the district of Malá Strana, close to Charles Bridge. As indicated by its name, this space was first created in homage to the musician. The wall is regularly repainted and before, anybody could draw on it but not anymore since recently. You should be able to recognise peaceful quotes such as ‘All we need is love’ or ‘If you lover, if you hater, if you troublemaker, we love you anyway ❤’. On sunny days, you may find a brave player in front of it (a bit folkloric, though). After visiting it, if you wish to stay in the mood, you can have a drink at the John Lennon pub next to it.

As much as I was not expecting street art in Vienna, I was positively surprised when I discovered the long fresco along the banks of the Donaukanal. Such a pleasant walk ending up near Hundertwasser Museum, where I’ve been twice and loved it both for the exhibition and the exterior architecture. The Donaukanal riverside brings a young and energetic atmosphere to the city. Don’t miss it if you go to Vienna. 😊 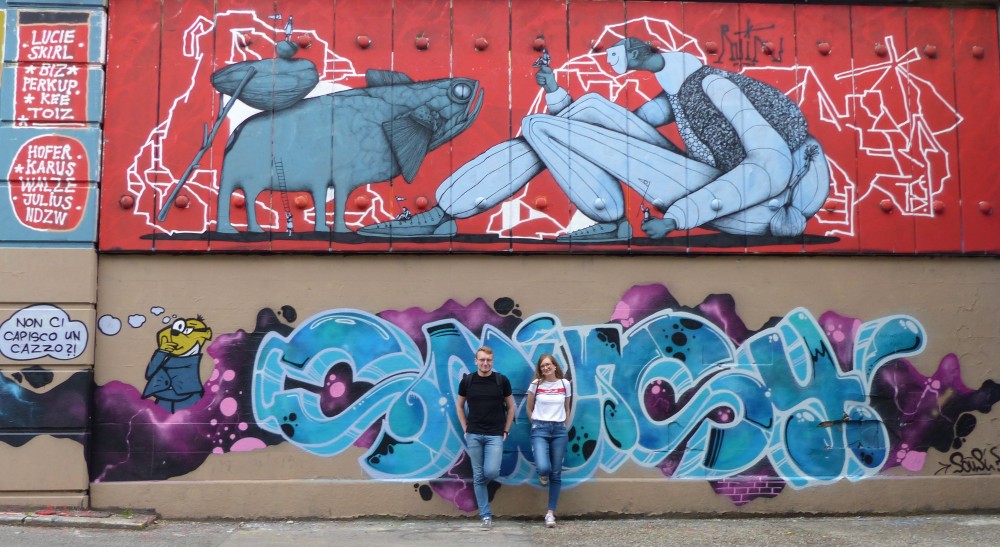 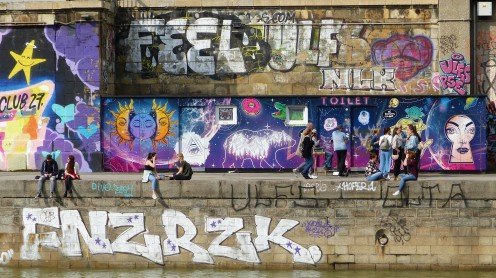 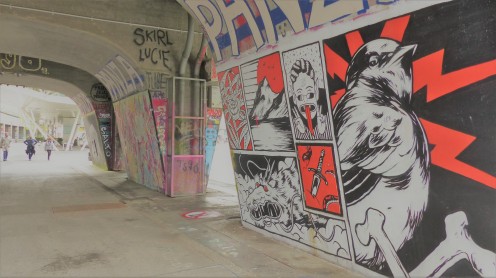 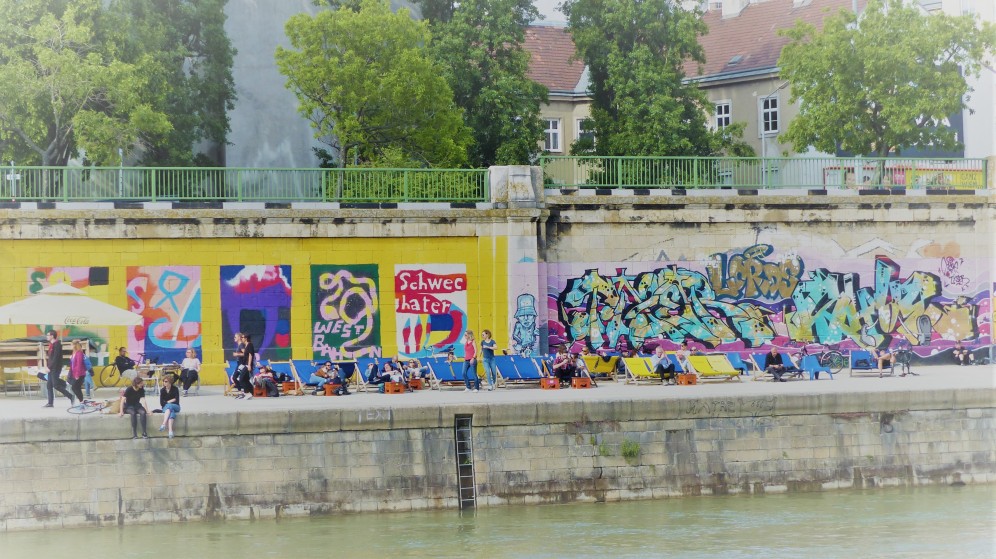 This article wouldn’t be complete if I didn’t mention the historic Berlin Wall. Funny enough, I’m actually passing through Germany right now, while I am writing this article in a night bus. This was the highlight of my visit to the German capital. Because it’s symbolic, because it’s emotional, because it’s universal. So many international artists had the honor to paint on these bricks which mean a lot, not only to the German nation. You can truly feel the human stories when visiting it, as well as a constant message of hope and rebirth. 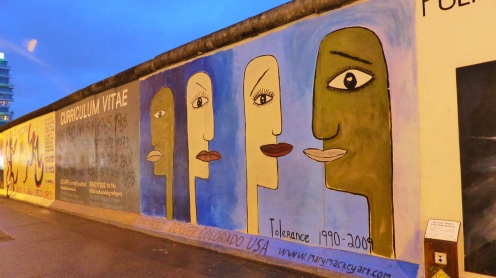 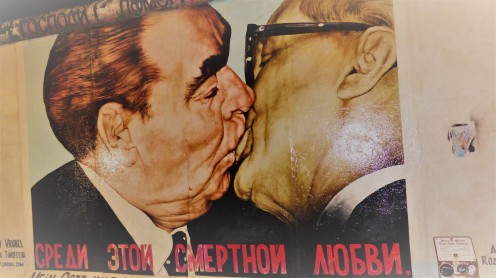 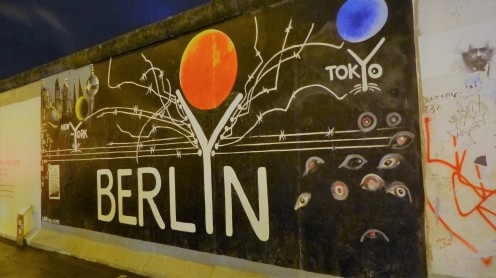 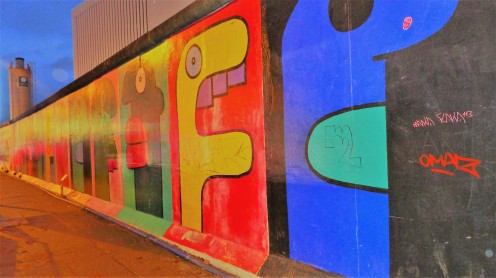 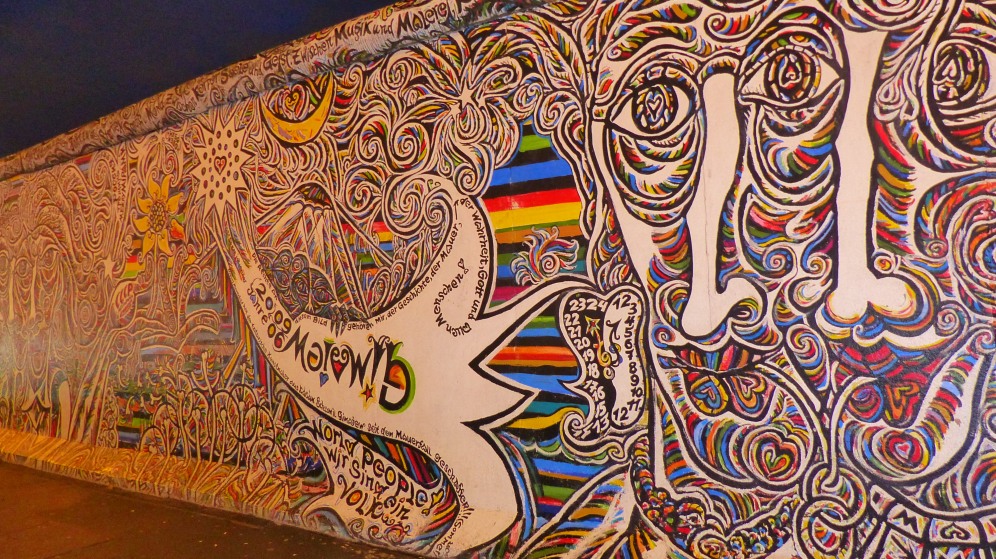 I am confident I will find out more places like these during my trips to come. This article may not be exhaustive, but the aim was to share with you my favourite cities when it comes to street art. Cities that I have visited, instead of some random Top 5 found online. What’s for sure is that I’ll keep an eye on the walls, on the ground and on the sky to cherish other ephemeral urban treasures. Do you have any must-city where you think I should go?

Also read: The best of Budapest